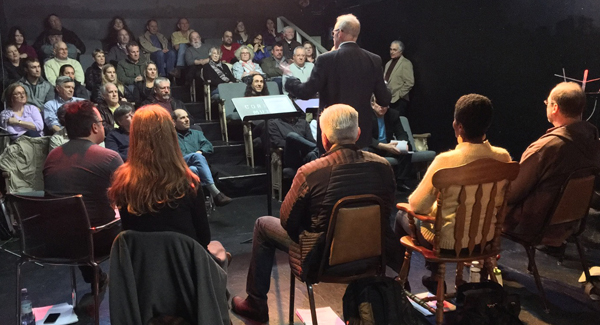 Members of the Northwest Screenwriters Guild had the pleasure of hearing portions of their screenplays brought to life by professional actors, in an event co-sponsored by the Seattle SAG-AFTRA chapter.

Held March 12 at the Eclectic Theater, the event featured script excerpts from a broad range of genres, and was followed by a question-and-answer session with the screenwriters.

While screenwriting programs such as Final Draft have a text-to-speech feature that allows you to assign different voices to the characters in your script, there is no substitute to hearing your script read by professional actors. That’s why the NWSG teamed up with SAG-AFTRA, not only for the benefit of some of our screenwriters, but also to provide the opportunity for actors to exercise their skills, and demonstrate their range should any of the featured projects move forward to production.

The NWSG members whose scripts were featured:

This is one example of the types of events the NWSG will sponsor throughout the year. If you’re active on social media, like our Facebook page, connect with us on Twitter, or get on our email list (see the right panel to subscribe).