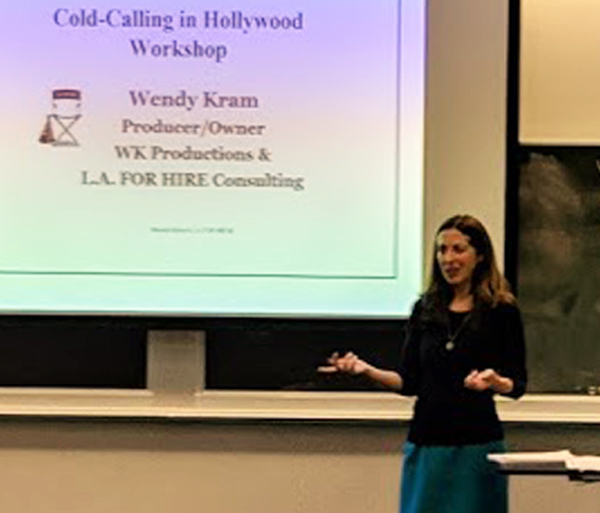 Industry executive Wendy Kram leads a workshop on ways for screenwriters to submit material for consideration.

Wendy Kram’s mantra is to help screenwriters get past their “I’m not good at pitching” fear.

Kram, a producer and owner of the Hollywood consulting firm L.A. FOR HIRE, shared her industry insights with the Northwest Screenwriters Guild at Seattle University April 14. The event, co-sponsored by Seattle U., was a mix of seminar and workshop, as Kram helped some attendees improve their introductions and pitches on the spot.

Currently producing projects with Anonymous Content, Kram has more than 20 years of experience consulting, producing, and developing projects at major Hollywood studios. So when it comes to pitches, she stressed the importance of highlighting the distinguishing factors not only of the story you’re pitching, but also of your background.

“Everyone has some unique expertise, some distinguishing factor” that helps substantiate expertise driving the story being pitched, Kram said. It can often be a particular uniqueness that can pique the interest of the industry executives.

“Take stock in your background,” she said. “Don’t forget to mention the obvious.” For example, if your script won an award or was a finalist in a major competition, mention it.  If you’re a lawyer pitching an idea about lawyers, be sure to mention you’re a lawyer. Expertise in the world of your story gains trust with producers, she added.

In addition to uniqueness and expertise, Kram said producers also gravitate toward pre-existing source material, such as books, plays, and true stories. That book you loved 15 years ago that never got produced as a film may be available for a low-cost or even no-cost option agreement, she said.

The source material, she noted, does not necessarily have to have achieved great levels of fame. Even a locally produced play that received local notoriety, or a blog with a regular following, can be enough to pique the interest of a producer.

Kram also stressed the importance of writers’ willingness to sign the industry-standard submission release forms when asked to do so, as well as consulting with an entertainment attorney prior to signing a release form.

In addition to her workshop, Kram also took pitches from NwSG Compendium members, and she is offering a discount to all NwSG members seeking L.A. FOR HIRE services, which include:

Northwest Screenwriters Guild members can contact Wendy by wendy@la4hire.com or 310-994-3258 to discuss services that might be the right fit, or to customize services to fit individual needs.

Learn more about the benefits of NwSG membership.