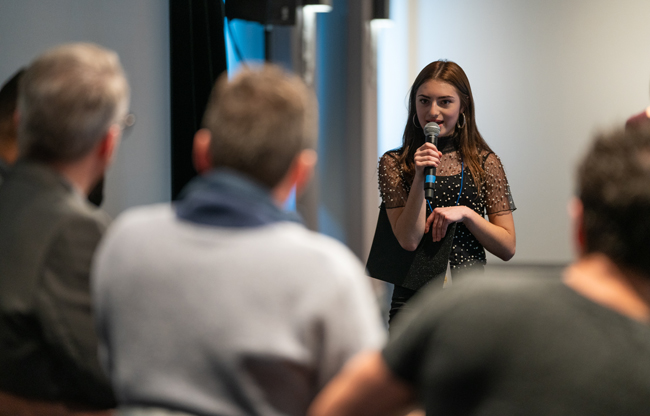 Last month the Northwest Screenwriters Guild hosted a pitch panel at the 2018 Seattle Film Summit with some of Hollywood’s biggest heavyweights, giving 12 writers a chance to win over a thousand dollars in prizes.

More than 50 Northwest writers submitted 60-second video pitches in hopes of being selected to present their ideas in front of these professionals, as well as a live audience of over 200 people. Grand prize winner, Myra Dietzel, won free admission to TheFilmSchool Winter Writing Intensive along with free software and other prizes.

All writers were fortunate to have their ideas vetted by top Hollywood professionals, such as Christopher Lockhart, who reads scripts for Will Smith, Robert Downey, Jr., Liam Neeson, Michelle Pfeiffer, and more, as head of story at talent agency juggernaut WME. They also got feedback on their movie ideas from Sean Robins, producer of such properties as TAG, Tom Cruise’s KNIGHT AND DAY, among others.

For those who showed literary promise, we had two managers on hand to field ideas, as well: Josh Adler from Circle of Confusion, and Kevin Parker from Artists First. And of course, if you’re idea was contained and capable of being shot at the right budget, critically-acclaimed indie producer Alex Schepsman, producer in-residence of The Bigfoot Green Room, was there to get your pitch off the ground.

After about one hour of hearing pitches, the judges announced winners. Aforementioned Myra Dietzel won first place. Coming in second was Arthur Rains-McNally. And last but not least, Kara Puerschner came in third. All writers are from the greater Seattle area.

Participating in events like the Seattle Film Summit Pitch Panel is just one of the perks of joining the Northwest Screenwriters Guild, where up-and-coming writers connect with amazing resources to improve their craft and make industry connections.

See you at our next event! 😉

Screenwriters from the Pacific Northwest submitted more than 50 video pitches to compete in the 2018 Seattle Film Summit Pitch Panel.